We told them the truth…about Santa

If you are still telling your kids that Santa is real, you may feel that this article is talking directly to you, and perhaps it is, but it is not meant to be against you.

If you are challenged to consider doing something different by reading this article, then great! And if you go along your way and don’t change anything, that’s just fine too!
This article is not a judgement on you, this is a recap of what we’ve done and how it has worked out for us and hopefully it can help you along your path as well.

Please read on and enjoy a walk down a different path, if for no other reason, to simply learn how other people do it 🙂

Now, on to the story…

Never in my life have I wanted a Christmas to come so soon as I have this year. Not only does this mark the end of the year (and who doesn’t want 2020 to end sooner than later?!), but it marks an emotional change that is tangible to people in every walk of life.

Christmastime changes the mood! It is the most wonderful time of the year (for most people) and kids come alive thinking about the gifts, the goodies and SANTA!!

Santa! The guy who represents all things to all people, can fly, can morph into a gas to go down your chimney (or through your RV slides) and makes everyone happy! It’s liquid joy for kids when the magic happens and they get just what they wanted from this grandfather-like figure who simply exists to dote on them…if you qualify, that is.

But for parents who believe in ethics and morals, this decision to play along comes with a slight pause…a negative gut feeling, a little lump in your throat as you make this fantasy a reality year after year, even though we know it is not true.

As pointed out in the Huff Post article linked below*, psychologist Christopher Boyle and mental health researcher Kathy McKay state, “Perpetuating the Santa Claus myth may set children up to realize that their parents are liars”. It goes on to say:

Emerging studies do suggest that parents’ lies may have a detrimental effect on a child’s behavior. A small MIT study on six- and seven-year-olds found that when an authority figure omits the truth, it may cause children to suspend their trust or be suspicious of anything else that authority figure says in the future. An experiment from the University of California, San Diego found that when children ages five to seven are lied to, they are also more likely to cheat and then lie in return.

But, are we really lying to the kids?

I mean, we don’t tell them the truth about pets dying, about the tooth fairy and the Easter bunny and we don’t really tell them where babies come from. Doesn’t this just fall into the category of “I’ll tell them the whole story when they are older” and “they’re too young to understand”?

“Yes! I believe it does!”, we tell ourselves and we march on with the plan…all the while knowing that one day…these kids will find out the truth. 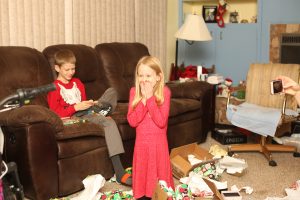 What’s the plan when they find out?

We don’t want to think about that. Perhaps they will just find out on their own, like a private-eye who is looking for clues! Maybe they will be overjoyed when they figure out the mystery, and exclaim “I’ve got it!, what a fun game this has been for all of these years!”

Maybe they will play along with a coy smile, knowing their younger sibling “still believes” and now they know the truth and are better off for it.

Or…no, I won’t say it…Ah…but, maybe it will work out and….oh man…I don’t want to think about this, but…could it really go bad??

Is it possible that my kids will view this as a lie instead of a fun game?

Is there any chance this will affect their trust in me as a parent, to find out that I’ve lied to them for all of these years? What if they find out Santa is fake, and then start asking about the tooth fairy, the bunny, the gifts…the reason for Christmas?!? Could they really find out 4 lies that I’ve told them all at one time, and still have confidence in me when I say “trust me?”. 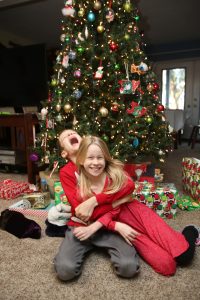 This is worth thinking about…

Michelle and I had different experiences growing up, concerning Santa. Michelle believed in Santa and doesn’t really remember when she found out the truth, but she doesn’t recall it being traumatic.

My parents never eluded to Santa being real and made it clear that “Jesus is the reason for the season” so I was never told the myth of Santa Clause.

When we got married, we discussed what we wanted to do in this area with our kids. We did research on how kids react to the news and whether it was worth it. Most of all, we wanted to know the answers to the following questions:

What happens to the kids who never believed in Santa?

Are they still happy about Christmas?

How does this effect their trust of us?

Does this diminish the REAL meaning of Christmas?

Do they miss out on the fun or do they just enjoy what they know?

Will they be emotionally scarred for life having been robbed of this “magical myth” or would they be scarred worse when finding out that we lied to them?

After hours of research and discussion, we agreed to start our kids out from the beginning with the truth.
We told them that we celebrate Christmas because of Jesus being born and that Santa, cookies and gifts are all part of the fun, but not the reason.
We helped them understand that their mom and I worked hard to make money, and every gift costs money so they will not get everything they wanted, in fact, they are not entitled to get what they wanted just because they were good, It’s based on our budget and that has realistic boundaries.

And…the tooth fairy is a fun story, but your tooth fairy mom is going to leave you a gift in exchange for your tooth (and let’s face it, that is a mystery in itself as she often forgets to leave the gift until the last minute!). Oh and Easter? That is a celebration of Jesus’ resurrection! Also, on that day we have some fun traditions of searching for eggs with goodies inside and decorating eggs, because that’s fun!

Also, your grandmother, who works hard to earn her money, is going to buy you a basket of goodies, because she loves you and loves to give you gifts.

I know, I can hear some of you gasping right now. How could we rob our kids of this joy?! How will this turn out?!?!?

Well, let me tell you how it went!

The kids hated it…all of their friends believe in Santa and they are left out.

They cry when they hear Christmas music.

They hate Christmas decorations and beg us not to go see Christmas lights for fear that their traumatic reality, that they never got to believe in Santa, will be more than they can handle. 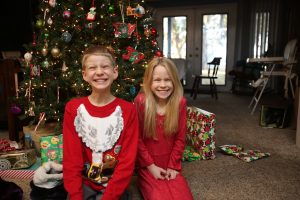 They LOVE Christmas, Easter, Valentines Day, the Tooth thing… and their parents.

They still PRETEND that Santa is real. They play with figurines and dolls and they talk about him coming through the chimney, then they whisper to their toys “Santa isn’t real, its just for fun” and then laugh about it, just like they do when they pretend their lego car can fly or their doll can cry and walk. It’s their imagination that comes to life and that doesn’t require a lie to be energized.

Yes, fortunately it was a success! They have joy knowing the TRUTH, and best of all, we don’t have to live in fear that our kids will find out prematurely, from their cousins, friends or on their own. We don’t have that lump in our throat as we think about Christmas or Easter, or any other holiday. We don’t have to explain why they didn’t get that massive gift on their list, even though they were good. There is no confusion over “that mean kid who got an X-box, while the nice kid got new socks”.

We don’t have to make up a lie to cover up the next lie, because we tell them the truth (what a concept, right?!) and they have never missed the “magic of the myth” for one second.. 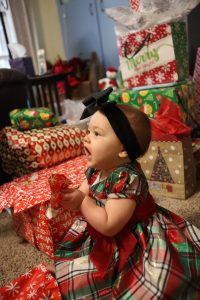 If you have been struggling with this decision I hope we have given you a fresh look into your options. If you’re thinking that the truth is a better option, I encourage you to make that change NOW. Sit them down and tell them the truth. Tell them about how you worked hard for your money and how you spend your money to give them gifts because you love them, not because they were good or because Santa loves them.

Explain how budgeting works and how giving works. Apologize for lying to them about this story and ask for forgiveness, then pray together and read the Christmas story about the real meaning of Christmas, Jesus’ birth. Your relationship will be stronger for it.

I am sure there will be tears, but being honest with your kids is an important part of growth and yields great results as they get older.

I will end on this note…

If you are a person of faith, being honest is a moral staple. Don’t be fooled by other influences and go against your better judgement. I have yet to find the scripture that says “be honest, except where your kids imagination is concerned and there is a fun game to play, at that time it is ok to be dishonest for approximately 8 years or so, but then, they must be told the truth, or find it out for themselves prior to adulthood”. Haha.

No, instead, the bible tells you like it is. Think on these things and have a Merry Christmas!

Proverbs 11:3
The integrity of the upright guides them, but the unfaithful are destroyed by their duplicity.

Proverbs 12:22
The LORD detests lying lips, but he delights in people who are trustworthy.

God can’t stomach liars; he loves the company of those who keep their word. 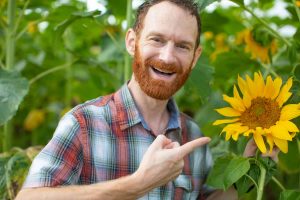 Choosing the life of your dreams!

Eli shares his RV build! 😱 He built this from h

How do you find vegan food when traveling? #redrob 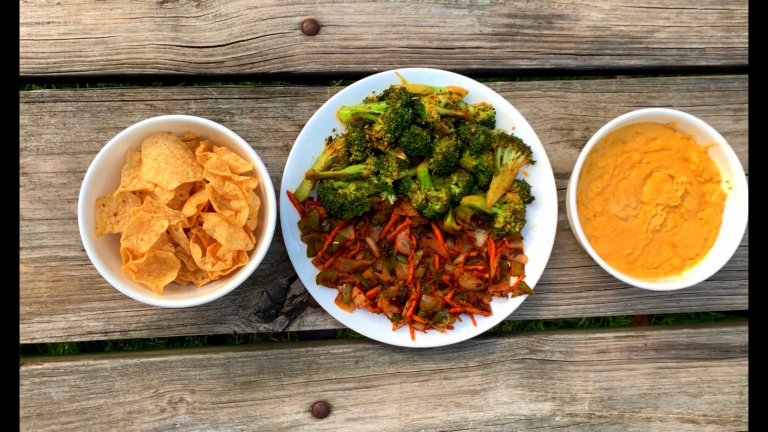 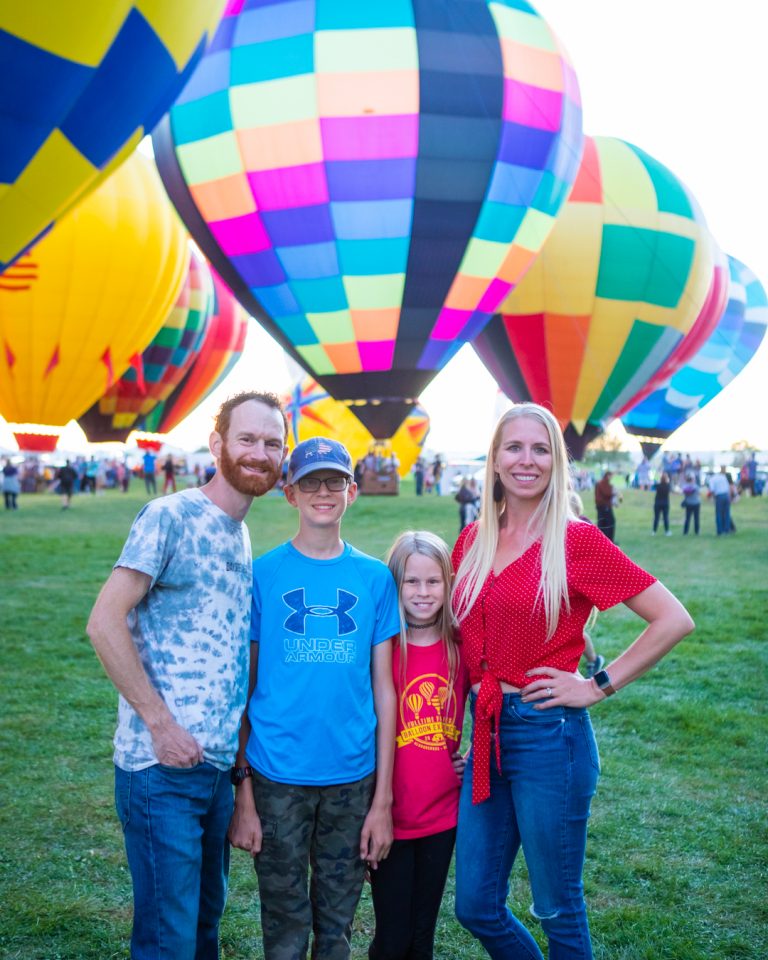 5 Reasons You Should Go To The Albuquerque International Balloon Fiesta! 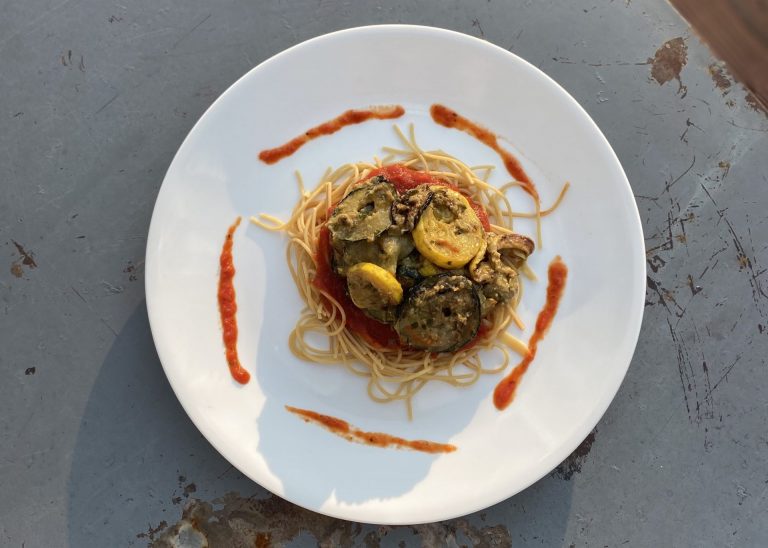